Last week we finished off Disc 1. Zidane, Vivi, Freya and new companion Quina were defeated in battle by Alexandrian General Beatrix, and the trio of Queen Brahne, Kuja and Beatrix had stated they were to move on to Cleyra in pursuit of the Burmecian King.

As Disc 2 starts we are once again outside Bohden Gate, the two guards that searched Steiner’s bag of pickles are discussing the rumours surrounding recent events. The Short Guard is frustrated at being on guard duty and wants to join the front lines in war, his colleague however doesn’t understand why anyone would want to go to war, and with that we join Steiner and Dagger aboard the Cable Car.

Steiner has his doubts around everything they’ve heard about Queen Brahne and doesn’t believe she is capable of starting a war, however, he decides his duty is to protect the Princess whatever it takes. It seems the cable car only goes so far on its journey to Alexandria, and stops half way there, this is because the journey is split into two with a cable car for each half of the journey, as one reaches the station in the middle, the other reaches either Lindblum (the cable car Dagger and Steiner are aboard) or the station that leads to Treno within the kingdom of Alexandria. 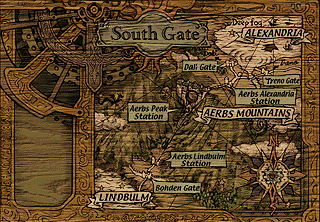 Whilst the pair wait for the Alexandrian cable car to arrive Dagger hears a familiar voice, Cinna and Marcus have arrived at the station from Evil Forest, just missing the cable car to Lindblum (because Cinna wanted to eat Bundt Cake), they head into the rest area and bump into Steiner who is far from pleased to see them. He accuses them of being there to try and kidnap the Princess again. Nazna the Moogle sits in the corner of the rest area and I have a letter for her (I don’t know why I assume Nazna is female, I guess the name sounds more feminine?)

I feel so sad whenever I see
Mary, that part-time worker.

Nazna gives Dagger a Kupo Nut as thanks for delivering the letter. From the shop here I buy Dagger an Air Racket, Mythril Rod, Glass Armlet and a Magus Hat, for Steiner I purchase Mythril Gloves and a Barbut.

Every time Dagger tries to speak to Cinna and Marcus, Steiner interupts and tells her not to interact with them, she ultimately has to put him in his place, asks why she can’t talk to her friends, which leaves him essentially speechless, seems Garnet is becoming less the Princess he expects her to be and more the Dagger that Zidane has tried to teach her to be. At that there’s a rumble and the Station Attendant announces that the cable car to Alexandria has arrived. It turns out that whilst Cinna was heading to Lindblum (and missed his cable car), Marcus actually wants to go to Treno. Marcus reveals to Dagger that the reason he is heading to Treno is because he is trying to locate an item called Supersoft that he can use to cure Blanks petrification. Dagger offers to help but Marcus refuses, and before she can make her claim for why her help could be useful, the Cable Car comes to a sudden halt. The Conductor thinks the reason could be engine related and leaves the cable car to investigate, but quickly re-enters saying that there’s a “demon with a pointy hat outside” Dagger, Steiner and Marcus all rush out to see whats going on and are confronted by an injured Black Waltz No.3 blocking the tracks.

This battle is literally just Marcus and Steiner smacking the thing with Dagger on healing duties, Black Waltz No. 3 wont hurt her either, so its fairly easy to keep the other two on their feet and the fight is over in four or five turns.

Back on board the Cable Car, Marcus comes to the conclusion that Dagger knows what going on with her Mother and Alexandria in Burmecia, though none of them know whats really gone down there just yet, the pair also understand that Steiner is in denial about it all. Marcus guesses that he will be unable to stop Dagger helping him find the Supersoft and notes that she’s changed (albeit it that there’s still some of Princess Garnet still there when she talks about the Nobles of Treno).

On the World Map I encounter a Ghost, the music is different in this battle, and rather than attack me the Ghost says it “could really go for some Ore” so rather than attack it I throw some Ore from my inventory to it, the battle ends with the Ghost saying “Give my regards to Ladybird”. After this I spend some time levelling up as Steiner and Dagger are only level 7 compared to the group in Burmecia all being at level 11 or thereabouts. Whilst levelling I come across Quan’s Dwelling, I find three Ethers and “Scorpio”

Scorpio was very timid.
He always looked at his
shadow, until one day,
he decided to look away.
He walked up a hill.
=Stellazzio Story=

I also found some markings on a wall

“Six months since I adopted Vivi. Still too small to eat?”

In Treno Marcus and Steiner argue about how to obtain the Supersoft, Marcus plans to find it and steal it. Steiner won’t allow him to do that and goes off on one, whilst his back is turned, Dagger wanders off.

A series of ATE’s follow Dagger as she explores Treno. In the first a thief pick pockets her, stealing 500 gil, you can prevent this but my timing was off. the following ATE has her attempt to chase the thief, but he manages to hide and she turns down a different path. The thief decides its about time he left town. She then asks an old man about the Supersoft, but he’s partially deaf and confused and talks about his deceased wife before telling Dagger that she’s still young and not to give up, lastly she finds her way to the Auction house and spots a man that she recognises up on the balcony (it’s Kuja but she doesn’t know of him properly yet, though I assume its the man she referred to back in Dali that she had seen around Alexandria Castle).

I explore Treno as Steiner and come across the Pick Pocket, Steiner asks him if he’s seen a pretty girl with long hair, which the Pick Pocket tries to deny but keeps blurting out information about her, that he stole nothing from her, then he gives Steiner a Power Belt (that he bought with the 500 Gil) before running away. The Power Belt allows Steiner to learn MP Attack and Counter, it can also teach Fira, but Steiner can’t learn that particular ability. From the auction room below, Steiner overhears two Noble’s discussing the nights auction and how the main attraction is a Reflect Ring.

Marcus also has a series of ATE’s. In his he heads to an Inn and meets Baku downstairs. Baku has discovered where they can get the Supersoft they’ve been searching for, it’s in a Nobleman’s home and its up to Marcus to break in and steal it. Baku tells Marcus that he’s got “two liabilities coming along”, I think he’s referring to Steiner and Dagger.

There’s trouble in this rainy city.
The guys I saw were heading
towards Vube Desert, west of Burmecia.

They’ll only find sandstorms.
What could the possibly want?

In the item shop the floor is like a huge cage, there’s a monster beneath it that the clerk says belongs to the store owner who likes to get people to battle it. From the shop I buy a Mythril Sword, Flame Staff, Ice Staff, Bone Wrist, a Bandanna and some Chain Mail.

When Steiner finally reaches the auction house, he also finds Dagger there who lambasts him

“How can I find the Supersoft when I keep having to listen to your complaints?”

Steiner is visibly deflated, she asks him where Marcus is but Steiner doesn’t know. Dagger decides shes going to go and try and find him and see if he’s found the Supersoft, she tells Steiner she’s going with or without him, ever dutiful, Steiner follows after her. Before leaving though I join in with the auction, I am outbid on everything bar a Mini-Cid, which is the only thing to go for less than 10,000 Gil, maybe I shouldn’t have bought all that equipment before.

As expected I find Marcus at the Inn, he informs Dagger he knows where the Supersoft is and he is ready to depart when she is. He leads her to Baku at the Dock, Steiner pleads with her for her to listen to his counsel and turn back, agreeing takes us back to the Inn and gives us another opportunity to prepare for whatever lies ahead, but I think I’ve done all I can in Treno for now and have taken an absolute hiding at Tetra Master, losing nine battles, drawing one and only winning three. And whilst I found a Yeti card and won a Sand Golem card (plus a Goblin and a Flan) I also manage to lose both those cards, plus my Cerberus, Ironite and Mimic plus others that I happened to have multiple of, leaving my collection pretty weak now. Baku asks if Dagger understands that breaking and entering is a crime but Dagger merely informs him that shes coming along as she needs to make sure that they don’t steal anything else.

Meanwhile, Kuja is talking to the auctioneer. The music during this scene is oddly reminiscent of the Shinra music from Final Fantasy VII,. Kuja reports that things went well in Burmecia, though it would have been better if he hadn’t seen “those vermin and the ugly elephant-lady”, the auctioneer is instructed to prepare something ahead of Kuja’s appearance in Cleyra and is then asked if a “pretty lady was in the crowd today?”. He talks about how the canary has flown into his cage willingly and bigs her to fly home to her Mother. I can only assume he is talking about Garnet. The screen fades to black with the text:

“I, too, will welcome
you home with open arms”